Legendary cellist and all-around good guy Mstislav “Slava” Rostropovich passed away in Moscow today. He was a friend and supporter of Shostakovich, Prokofiev, Britten and many others like Dutilleux, and many of the greatest works for cello of the 20th century, indeed of all time, were dedicated to him. 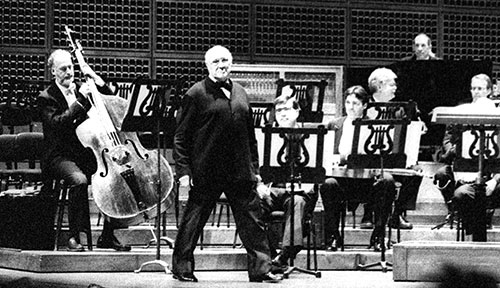 I had the opportunity to hear him conduct Shostakovich’s “Babi Yar” a year ago (when I took this photo) and a few years earlier as a cellist the Dvořák Cello Concerto (sadly in replacement of the far superior Shostakovich First Cello Concerto that was dedicated to him).

The world of music has suffered a grievous loss. None of the current generation of cellists (Ma, Gastinel) is of the same caliber. As a conductor, his legacy is more mixed, as his Shostakovich interpretations often lack fire, but his Prokofiev cycle with Erato is marvelous, specially the Fourth in its original version.

Sony’s Norio Ohga is a classically trained musician and conductor. In contrast, Steve Jobs is clearly not a classical music lover (and indeed is reportedly partially deaf). If he were a classical aficionado, the iPod would not be as poorly designed for classical music.

I have started backing up my extensive CD collection (99% classical) using the new Apple Lossless Encoder, and switched from my original 5GB iPod (which does not support ALE) to a new 15GB model, with half the upgrade paid for with my universal upgrade plan. I had actually started with straight uncompressed PCM audio, but while the old iPod nominally supported it, its hard drive or buffering algorithm would have a hard time keeping up the 1.5 Mbps flow of data required and often skip. I only used my old iPod on flights, where the ambient noise would drown out the low quality of MP3s, but the new one is a better device, specially when coupled with high-quality earphones from Etymotic Research, and I may use it more regularly.

The simplistic Artist/Album/Song schema is completely inadequate for classical music, where you need Composer/Performer/Album/Opus/Movement. This can be kludged by dropping Album and using it for the Opus instead, and fortunately in recent versions of iTunes and the iPod software, there is a field for Composer (which wasn’t there when the iPod was first released). The Gracenote online database CDDB is not normalized in any way, and rekeying the metadata is actually the most time-consuming part of the whole process (we have Sony and Philips to thank for this monumental oversight in the CD format).

Even then there still are flaws. If you have two different interpretations of the same piece by different performers, the iPod will interleave the tracks from both of them, so you have to add numbers to the Album field (used for Opus) to distinguish between them. If you use the “keep organized” option, folders are named after the artist rather than the composer, which is rather inconvenient and illogical. It could be worse: earlier versions of the iPod would actualy force pauses between tracks, which basically sabotaged dramatic transitions, like the one in J. S. Bach’s Magnificat between the aria “Quia respexit” and the thundering chorus of “Omnes Generationes”.

In passing, I have to tip my hat to Apple for pulling off one of the greatest scams in consumer history since the Bell Telephone company made people accept time-based billing for telephone use. Compare the 99 cents you pay for an individual track on the iTunes Music Store with the $18.99 list price for a Compact Disc (in most classical albums, you want the whole album, not just some stray bits of goodness in a sea of force-bundled filler material).

Instead of a high-quality 16-bit 44.1kHz PCM audio stream (or even better if you use one of the competing multichannel high-resolution formats SACD or DVD-Audio, although the difference is very subtle), you are paying for low-quality AAC files (I am the first one to admit that for most pop music, adding noise or distortion actually improves the signal to noise ratio). You also receive the dubious benefits of Digital Rights Management (i.e. they infringe on your fair use rights to protect the record industry cartel’s and get their acquiescence). No booklet, no durable storage medium, no possibility of resale.

The iPod interface also seems to be poorly internationalized, unlike iTunes. It mangles the names of Antonín Dvořák or Bohuslav Martinů, but oddly enough not those of Camille Saint-Saëns or Béla Bartók.